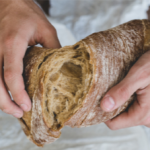 In his gospel, Mark wrote:

“For they had not understood about the loaves, because their heart was hardened”(6:52)…

… after sharing the story of how Jesus fed a crowd of five thousand with only two fishes and five loaves of bread.

But “they had not understood about the loaves.”

We hear that story so often, and we get used to it, but it must have been unbelievable to experience. To bite into a loaf of bread that had not existed a moment before—could not exist except by a miracle—a rearrangement of atoms, perhaps? Or the instant creation of molecules out of nothing? Try to imagine, handing out one loaf, only to find another appear in its place. But then again, isn’t that true of whatever we eat? Our everyday food would not exist except by the miracle of God’s creation.

But still, they had not understood about those loaves. 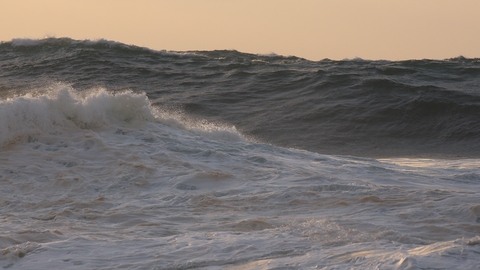 That same night Jesus told the disciples to get into their boat and cross to the other side of the sea, while He remained on land to pray alone.

The wind blew hard that night. The disciples strained at the oars against the wind and waves, until they saw Jesus coming toward them, walking on the water.

You know the story… Jesus invited Peter to walk on the rough seas for himself. Peter stayed above sea level only as he kept his eyes on Jesus. “But when he saw that the wind was boisterous, he was afraid; and beginning to sink he cried out… Lord save me!”  (See Matt 14: 25-33).

Jesus saved him, of course. As He pulled Peter out of the water, He asked, “O you of little faith, why did you doubt?”

I know why. Because Peter did not yet “understand about the loaves.” None of them understood yet.

When Jesus stepped into the boat the wind immediately died down. His supernatural power stunned and amazed the others, and so they worshipped the Lord. This is where Mark inserts his muse, “…they did not understand about the loaves because their heart was hardened.”

But they were worshipping Jesus. Why did he say that here? What was there not to understand about the loaves? I want to know, because I want to be someone who does understand.

John gives us a hint in his description of this story (chap. 6). The morning after that stormy night, the people who ate the miracle loaves wanted more.But they did not understand about the loaves. Jesus explained to them their misplaced desire. “You seek me, not because you saw the signs, but because you ate the loaves and were filled” (6:26).

What were the loaves about? The “signs”—the coming of the eternal kingdom, not about food that temporarily fills bellies. “Don’t labor for the food which perishes,” Jesus told them, “but the food which endures to everlasting life…”  (6:27). I’m sure this statement shocked them. Isn’t it good to work for food to feed their families?  Yes, of course it is.

“What shall we do, that we may work the words of God?” they asked Him.

“This is the work of God,” He answered, “that you believe in Him whom He sent.”

Jesus invited them to look beyond the everyday toil of life into the deeper meaning, to what those loaves were really all about, The Bread of Life Himself, who transforms the struggle of life into inner rest and purpose. 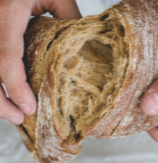 We don’t worship Jesus because He has supernatural power that can do things for us. But His supernatural power is a sign to draw us into relationship—“the true bread from heaven…He who comes down from heaven and gives life to the world” (6:32-33). Not a life that we see “out there,” but the life of His own Presence filling and transforming us with peace, joy, holiness and mercy, so we can extend peace, joy, holiness and mercy to others, extending His kingdom into our world. It’s not physical bread that sustains us… “but man lives by every word that proceeds from the mouth of the Lord” (Deut. 8:3). The Bread of Life.