↓
Home→God's Touch In Our Lives→Even When We Fight It, The Good Shepherd Really Does Lead Us to Quiet Waters 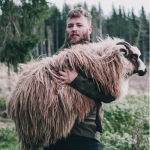 My son Tommy picked up his desk chair and threw it across the room. As I side-stepped the projectile, Tommy screamed “I don’t want to go to bed!”

He was about ten or eleven at the time, a few years after we adopted him from the foster care system. He had intellectual disabilities as well as a gamut of behavior disorders common to foster care children. Those first four or five years were about surviving from one moment to the next. But the Good Shepherd–well, it sounds cliché–but it’s true–the Good Shepherd really was there all the time. Though I sometimes naively questioned the Lord’s methods or misunderstood his plan, Jesus provided for our real needs by constantly leading us to the peace of still waters, and in this case, making us lie down in green pastures (Psalm 23:2).

That night, Tommy really, really did NOT want to lie down. I don’t blame him. He had to get up early the next morning, and we were both exhausted from a long day, and there were other kids in the house who could stay up later, so “it wasn’t fair!”

Sometimes Tommy’s behavior called for tough discipline. But in times like this, that only heightened his desperation. It was certainly the right thing to rescue him from an abusive birth family, and his case managers did everything in their power to care for him in the best way possible. But those six years of lobbing from one set of parents to the next ravaged any roots he might have managed and destroyed his trust. So with hardened desperation his little soul protected itself from more pain by demanding to be in charge of his own life.

Hmm… Though my “adult” poise hides it behind a mask of proper Christian conduct, I’ve also played out my own tantrums in desperation to get God’s attention and give me what I thought I wanted. Sometimes I deep-down doubted God would help, so I fought to fix and control my own life. I had no right to judge Tommy.

But during these violent moments I usually had no idea what to do. Sometimes I reacted out of my own insecurity which made Tommy more determined to self-protect. But this time, my Shepherd King led me beside still waters so through a mother’s love he made Tommy lie down in green pastures.

“I love you, Tommy,” the Shepherd’s love spoke through my own quiet voice. He kept yelling as I scooped him up in my arms, but Tommy didn’t fight my embrace. As much as he demanded his own way, his little dry soul gulped up the Shepherd’s refreshing quiet waters that we both drank from at the moment.

I laid Tommy down in the still waters of the bed and cuddled up beside him, saying over and over, “I love you, Tommy.” He very quickly fell asleep.

“In grassy pastures he makes me lie down,” David wrote of the Shepherd, “by quiet waters he leads me” (Psalm 23:2). Sometimes those words “he makes me” offend modern ears. How dare he force me! And yes, in most cases it’s very wrong to force someone to comply to your own will. But our Good Shepherd of pure goodness has only our ultimate good in mind. He loves us before we even know that’s what we really want.

When our exhausted souls scream with a desperate struggle to control, with earnest passion Jesus takes the initiative to lift us in his arms. He cares before we learn to trust him for it. His love provides the inner peace our souls crave before we even know we want it. He makes us lie down in grassy pastures, and leads us to quiet waters.

Tommy didn’t know it was love he really wanted. He thought he just needed more control. He didn’t understand he needed to open his heart and trust again, let alone how to do it. It hurt too much. The Shepherd had to “make him lie down” by giving him the love his soul craved. And over time that love transformed him. Tommy is now nearing thirty and has become a wonderful joy who’s claimed that making people happy is his life’s mission.

Lord, thank you for scooping us up in your arms when we need the care we don’t even realize we need. Strengthen our trust in your unending love so we thrive in your refreshing peace.

Please feel free to comment or share your own thoughts. How has the Shepherd’s love brought you to his quiet waters?